Due to its seclusion, Upper Mustang has one of the most well-preserved cultural ambiances in the world, with its Tibetan Buddhist culture still functioning as it did before hundreds of years.Unlike many of the other prominent trekking destinations of Nepal, Upper Mustang flaunts a slightly dry and arid environment to trek through. Due to Mustang's location in the rain-shadow zone of the Annapurna and the Dhaulagiri Mountain Ranges, it receives very little rainfall, thus making Upper Mustang Trek a good option for monsoon trekking.

Trekkers can experience amazing terrains here- most of which are loose conglomerates of magnificent dunes. As trekkers travel further north through the valley during the journey, they can witness the hues of the mountains change their tincture each day with the movement of the sun, from red and brown to ocher. The Upper Mustang Trek presents its trekkers with many Tibetan Buddhist traditions that manifest in monasteries, Gumbas, Chortens, and Stupas scattered throughout the journey.

The trek is an excellent way to experience the Tibetan Buddhist culture. Tibetan Buddhism and the land's myths and legends are intertwined and present trekkers with cultural threads that, in turn, are weaved into the landscape itself.So what are you waiting for? Join us for an unforgettable and unique trekking experience in Upper Mustang! Don’t miss the opportunity to take in Mustang’s many mesmerizing features with our well-trained guide and professional staff members! Book your trip with us today!

*Visit the capital of Upper Mustang- Lo Mangthang, a historic settlement of the ethnic
Loba people
*Visit the mysterious Sky Caves in Mustang, a collection of more than 10,000 caverns in
the high rocks of the Kali Gandaki River Valley
*Experience an unadulterated Tibetan Buddhist Culture prevalent in the region for
millennia, and visit monasteries like the Lo Gekar and Nyiphu among others

You may arrive at the Tribhuvan International Airport at any time. Upon your arrival, you will be greeted by one of our airport representatives who will help you get transferred to your Hotel. There are no planned activities for the day, so you may check into your Hotel and relax. Overnights stay at the Hotel in Kathmandu.

Today, your guide will be preparing the climbing permit, TIMS Card, as well as other necessary permits on your behalf. You have time to assess your gear and equipment along with purchasing or renting new gears for the climb. Also, if you wish to, you can indulge in a rock-climbingadventure as a warm-up to the trek. After all the necessary arrangements for the trek are made, you can take on a sightseeing tour of the Kathmandu valley. You can visit the famous UNESCO World Heritage Sites such as Pashupatinath temple, Swayambhunath, Boudhanath, and Kathmandu Durbar Square.

Today, you will be transferred to Pokhara- the tourist hub of Nepal. Pokhara is a beautiful city and the second-largest metropolis of Nepal situated beside the pristine Phewa Lake. You will take a 6 hours’ drive along the Prithvi Highway, enjoying the sceneries of lush green hillsand the Trishuli River. Upon arriving in Pokhara, you can enjoy excellent views of the Annapurna Peaks like the Machhapuchhre Himal and the Dhaulagiri Peak, among others. You can also enjoy a leisurely boat ride in the lake if you wish. Overnights stay at the Hotel in Pokhara.

Today, you will have a short flight from Pokhara to Jomsom- the headquarters of the Mustang region that spreads over both banks of the Kali Gandaki River. The town of Jomsom is famous for its Saligram– fossilized black shells that are believed to be the natural reincarnation of Lord Vishnu, found by the banks of the river.

From Jomsom, you will then trek to Kagbeni, also known as “the Gateway to Upper Mustang.” A special permit is needed to travel into Kagbeni. The settlement of Kagbeni still has many ruins that are remnants of the ancient prosperous kingdom that it once was. When you arrive in Kagbeni, trekking through rice fields that are planted below massive eroding cliffs, you can see traditional homes built with mud and stacked with stones that show signs of measured weariness of time. Kagbeni was a rendezvous point in ancient times where traders from Lo Mangthang, Manang and Dolpo would exchange textiles, meat, and salt. Overnights stay at the guesthouse at Kagbeni.

Today, you will trek from Kagbeni to the village of Chele. It takes about 5 to 6 hours of trekking to reach Chele, a village situated at an altitude of 3,050 meters. The trekking trail follows the banks of the Kali Gandaki River, and along the way, you can also enjoy tentative views of the Nilgiri and Tukuche Mountain Peaks. Coruscating through the Kali Gandaki River Valley, you will hike alongside the riverbed to pass the Kalo Bhir along the journey.

Further from Kalo Bhir, you will come across Sky Caves- one of the recently discovered archeological treasures of Nepal. Perched hundreds of meters above the ground inside the rock caverns, these Sky Caves were also featured in the National Geographic. The trekking trail also includes passing through an apple orchard and ethnic villages like Tengba, Gumbakang, and Chhusang before finally reaching Chele. Overnights stay at the guesthouse at Chele.

From Chele, you will climb through a steep terrain that is devoid of any vibrancy. Instead of woodlands, the acreages here are rather bleak and lifeless, with strong winds and high cliffs flouting amazing cobble formations- a phenomenon resulting from the wind and sun erosions. The environment is sort of like the Wild West from Spaghetti Western movies of America.

Hiking onto a spectacular steep canyon, you will pass the gorge and then have a slow descent down to some Stupas located on the canyon ridge towards the village of Samar- considered to be one of the wettest and the greenest villages of Mustang. From here, the trail continues towards Syanbochen. Along the way, you will also come across a four-story building that was the former royal palace of the region’s last monarch. Overnights stay at the guesthouse at Syanbochen.

From Syanbochen, you will make your way to Ghyami today, passing by a low-mountain pass called Yamda La pass at 3,850 meters. Along the way, you will pass by a few teahouses,beautiful villages, andChortens.You walk through dry terrain alongside the view of the great Annapurna range. Once atGhyami, you can visit the Red Gompa that houses interesting collections of Buddhist statues and amazing Thangkha paintings. Overnights stay at the guesthouse at Ghyami.

From Ghyami, we head to Charang. Charang is a small settlement that has few traditional houses painted in crimson red that rise up against the withered cliffs that surround it. You will see many Mani stones here, carved with prayers and colorful prayer flags perched atop the Mani walls that sway gently in the wind. Overnights stay at the guesthouse at Tsarang.

From Charang, you will trek through the arid landscape, passing by flat desert dunes that occasionally flaunt cacti and shrubbery succulents towards Lo Mangthang- the historic capital city of Upper Mustang’s the Hidden Kingdom. The trek is filled with a peaceful ambiance broken only by the occasional mule caravan that transfers goods between villages.

The amazing rock formations on the cliffs and the boulders along the way are quite dramatic; the twisted and serrated rocks rise into the air and present distinct marks of natural erosions that form unique lopsided swivels. Overnights stay at the guesthouse at Lo Mangthang.

This day is reserved for exploration of the village. Lo Mangthang is one of the most historical destinations of Mustang. It was constructed by its first ruling monarch- Ame Pal, who built giant walls to surround the village to protect it from bandits. For the longest time, Lo Mangthang was the only walled city of Nepal. Much of the whitewashed wall still stands today.

The village is also noteworthy for its King’s Palace- a nine-cornered, five-storied building that was constructed during the 1400s, which houses many Ranjana inscriptions. You can visit the village’s four major temples- the Jampa Kakhang, the Thubchen Gompa, the Chodey Gompa, and the Choprang Gompa. Likewise, you will also pay a visit to the Nyiphu and Garphu Cave Monasteries at Chhosar.

The Nyiphu monastery is painted in red and white stripes that contrast magnificently against the dull-creamy tincture of the high eroding cliffs. Garphu, on the other hand, is a hand-dug cave ruin that is situated above and adjacent to the monastery on a hilltop. These caves are monastic in presentation, and you can explore the caverns that the ancient people used for many different things like burial chambers, storage rooms, and meditation, and ritual rooms. Overnights stay at the guesthouse at LoMangthang.

From Lo Mangthang, you will trek to Dhakmar village today, hiking through the arid landscape that is ornamented by towering cliffs and huge boulders that rise up to the sky, believed to be formed by the scattering of a demon’s blood slain by Guru Rinpoche. Along the way, you will also pass by the Lo Gekar Monastery- one of the most important monasteries of the Lo Tso Dun (the ethnic Loba people of the region).

The monastery dated back to the 8th century and was built by Guru Rinpoche after he defeated a Dakini (Demon), cut off its body into many different parts, and buried its heart on the monastery’s site. Along the way, you will also encounter a Mani stone wall carved with Buddhist tantra- the longest Mani wall in the world. Finally, you will reach Dhakmar. Overnights stay at the guesthouse at Dhakmar.

From Dhakmar, you will hike back south, following the same trekking path that meanders along the arid, rocky terrain back to the village of Ghiling. Along the way, you can see majestic views of the ivory Annapurna and Dhaulagiri peaks. Overnights stay at the guesthouse at Ghiling.

From Ghiling, you will trace your way back to Chhuksang. The trek is leisurely, and the only restraint that you can possibly face today is the strong winds that blow through the valley, especially during the afternoons. The dry plateau-like landscape looks alien-like, with their parched and desiccated rocks that look like they are carved by the hands of a giant, which ties into the myths about the region and the legends that the Loba people believe. Overnights stay at the guesthouse at Chhuksang.

From Chhuksang, you will make your way back to Jomsom, trekking on the familiar path that you used at the beginning of the trekking journey.The trail passes by the yak caravans, and you can see local people dressed up in traditional attire. Pass by small pockets of amiable lands are used for agriculture. You can take in the last views of the arid lunar-like landscape of Mustang along the journey. Overnights stay at the guesthouse at Jomsom.

Day 15: Fly back to Pokhara

From Jomsom, you will catch a flight back to Pokhara, bidding the Kali Gandaki River valley goodbye. Upon arriving in Pokhara, you can visit various landmarks like Peace Pagoda, Mahendra cave, and Davis fall. Enjoy the evening relishingthe beauty of Phewa Lake as you have dinner. Overnights stay at the Hotel in Pokhara.

Day 16: Drive from Pokhara to Kathmandu

You will drive back to Kathmandu today. After reaching Kathmandu, you can spend the rest of the day as you please – shopping or visiting restaurants. You can also relax at the Hotel. Overnights stay at the Hotel in Kathmandu.

Day 17: Fly back to your home country

Approximately three hours before your scheduled flight, you will be taken to the airport for your departure. 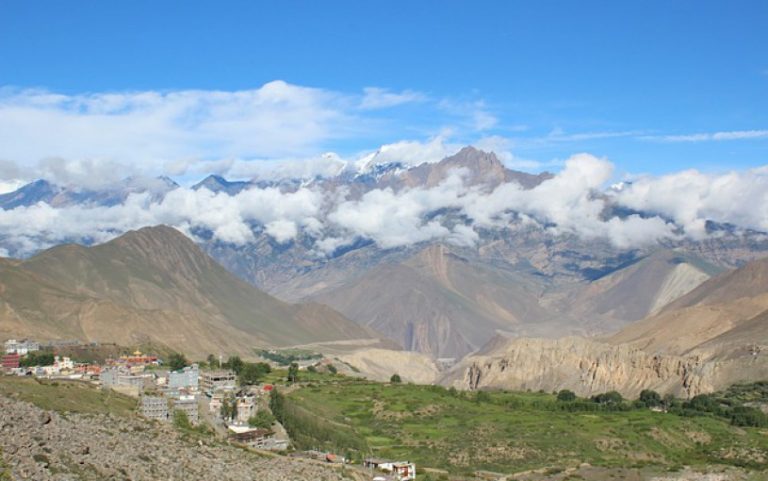