best place to explore the nature

Visit Bhutan (DRUK YUL, Land of the Thunder Dragon) and cherish your unique holiday experience for ever. Bhutan travel offers you the great opportunities to explore this exotic land by trekking in Bhutan, Birding in Bhutan, Bhutan tours and Bhutan holiday packages offered by AMAZING.

Bhutan is proud of its geographical diversity ranging from 100 m in the tropical south to the 7554 m Kula Kangri on the mountainous Tibetan border. It is an exotic land of High Mountains and lush valleys, snow-clad peaks and clear running springs, a pristine ecology and an incredible wealth of wildlife. Hidden in the eastern Himalayas between India and Tibet, this sparsely populated country is the last surviving Mahayana Buddhist State and The Last Paradise on Earth.

PARO VALLEY: Paro Valley is truely an enchanting valley. It consists of temples such as Kyichu Lhakhang (one of the oldest and most sacred temples in Bhutan built by the Tibetan King Songsten Gompo), Drukgyel Dzong (Symbol of Bhutan’s victory over The Tibetan invaders), Takstang Monastery where Guru Rimpoche meditated to subdue evil spirits, Ta Dzong (the national Museum) and others.

Punakha: Punakha served as the capital of Bhutan until 1955 and is the winter home of the central monk body now. The Punakha Dzong houses many sacred artifacts and temples. The road from Thimpu to Punakha crosses the 3,115-meter Dochula pass.

Wangdi Phodrang: It is situated 70 kilometers /112 miles) southeast of Thimpu and is one of the historical places in Bhutan. It is distinguished primarily by its dzong, which completely covers the spur of a hill and commands excellent views of both the east-west and north-south routes.

Gantey/Phobjikha: A broad glacial valley (10,000 ft) on the flanks of the Black Mountains, Phobjikha with gently sloping hillsides encloses a space of astonishing beauty described as “the most beautiful valley in the most beautiful country in the Himalayas”. Every winter, the rare and beautiful black-necked cranes return from Tibet to the Gantey valley where they are protected. Gantey also has a very interesting Nyingmapa monastery, the only one of its kind west of the Black Mountain range.

THIMPU: Lying in the fertile Wang Chu river valley at an altitude of 7,710 ft (2350 meters), Thimpu – the capital city of Bhutan is an engaging blend of the old and the new. A unique law, which retains the forms and motifs of Bhutan’s traditional architecture even in new buildings, give Thimpu a delightful structural harmony. The places to visit in Thimpu include Tashi Chho Dzong – the capital’s most striking visual landmark and the seat of the Royal Government and Central Monastic Body, the Royal School of Performing Arts, the School of Traditional Painting, the Institute of Traditional Medicine, the Handicrafts Emporium and the Memorial Chorten dedicated to the late king Jigme Dorje Wangchuk.

Paro: Paro is located 65 kilometers to the southwest of Thimpu. It is the site of Bhutan’s only airport and is the most beautiful western valley. Paro hosts the colourful spring Tsechu and has a number of magnificent sights and monuments. The pastoral beauty of Paro valley, panoramic views of Mount Jhomolhari, the National Museum housed in an ancient watchtower, the Takstang Monastery, Drukgyel Dzong (the fortress built to commemorate Bhutan’s victory over Tibetan aggressors), Kyichu Lakhang and Dungtse Lakhang are the major attractions in Paro.

Bumthang: Bumthang is in the central part of Bhutan and consists of many undulating and verdant valleys well known for their beauty, temples and palaces of historical significance. Bumthang offers some of the best treks in Bhutan, ranging from easy walks in the idyllic countryside to extended treks to explore hidden alpine valleys, where the warm, unquestioning hospitality of the people and the pristine beauty of the land belong to another age. Mebartso (the Flaming Lake) allures all the visitors to Bumthang.

Trashigang: Trashigang is the second biggest urban centre after Thimpu. It is known for its beautiful woodwork, fine weaving, the Trashigang Dzong, built on a spur overlooking the Gong Ri River 1,300 ft below and Dametsi Monastery – the most important monastery of Eastern Bhutan.

Trongsa: Trongsa in central Bhutan is about 129 kilometers east of Wangdi and crosses the 3,300-meter Pelela pass. It is the site of ancestral home of Bhutan’s Royal Family – The Trongsa Dzong that houses 23 temples. Bhutan’s most impressive fortress and, Trongsa is a strategically located town on the east-west route. The sprawling Ta Dzong (The Watch Tower) is built on a spur that commands a beautiful view of the Mangde river valley.

Laya and Lingshi: This region of high pastures (up to 16,000 ft), glaciated valleys, colourful semi-nomadic yak herders in their conical bamboo hats, hot springs, and snow covered Himalayan peaks lies in the far north of western Bhutan. It offers one of the best trekking in Bhutan. 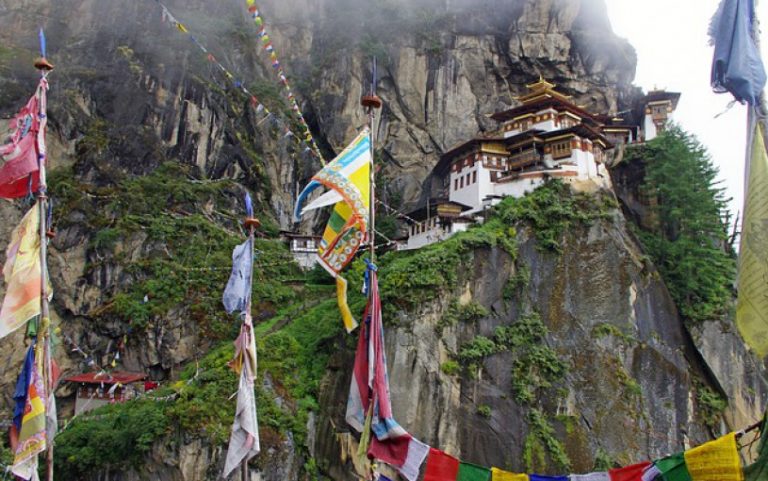